May 23, 2011
Some wonderful friends of mine got an idea one day that they wanted to help me and Chris ou and raise some money for us, so they came up with the idea of a car show in Woodbury. After they got the square reserved for the day, everything started coming together. They decided to have t-shirts made to sell, and through donations, the shirts were completely paid for. They decided to have concessions, too and almost 100% of the food for the concessions was donated. Then came along some bands who volunteered to play at the event and someone who offered to loan us their sound equipment. And along with about a million other things, it all just fell into place. Channel 4 News even got whiff of the event and showed up at my house one day to talk to me about the event and broadcast it on their 5 o'clock news.  Here is the link to that story if anyone wants to see it! http://www.wsmv.com/news/27792221/detail.html

On May 14th practically the whole town of Woodbury came together to support Christian and us. We were blown away by the amount of support we received. People we have never met donated to the benefit in various ways. People whom we hadn't met until that day drove to Woodbury from all over the area to show their support to us. And friends we've known for years came out and lifted us up.

Fox 17 News came out to do a story on the benefit and interviewed Chris and I. Christian has just become a TV celebrity! Here is the link to that:  http://www.fox17.com/newsroom/top_stories/videos/wztv_vid_7514.shtml

Another wonderful and new friend of ours (because of Christian), Pamela Randolph, drove her RV to Woodbury for the day to support us and so that Christian could have somewhere to stay in case of nasty weather, and that RV came in handy.

It rained twice during the event and never got above 75 degrees for the day, but it raised more money than anyone had expected. 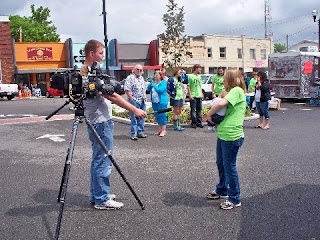 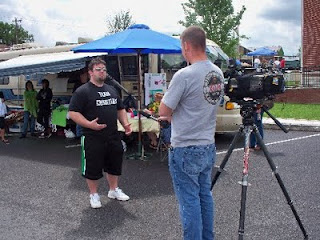 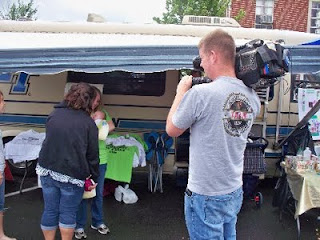 This helped me and Chris so so much. We were so worried about how we were going to pay the bills when I had to miss weeks of work to be with Christian during his surgeries and recoveries. We had no idea how we were going to afford the gas to get back and forth to Vanderbilt 2 to 3 times a week for appointments. We were so worried about how to get Christian the absolute best care possible, and now, even though this money won't last forever, it has taken a  huge burden off of us. We know now that no matter what, Christian WILL get the best care and everything that he needs. And all of this because of the love and generosity of people, some we know, some we don't, some we just met but I know will be life long friends. And from the bottom of our hearts, from me, Chris, and Christian, THANK YOU SO MUCH!!!