How Could You Not

January 23, 2012
I have been filling my blog lately with articles that I write for the Cannon Courier on disability advocacy and education, and between writing that bi-weekly article, and law school, and a full time job, and being an active member of my church, AND raising a child who has special needs, I don' t have a whole lot of time to just sit and write from my heart. But recently, a topic struck me that I just had to post about.

A sweet, sweet friend told me this week through Facebook that she considered me the "epitome" of a good mother. I gasped at such an astounding comment. I do consider myself a very good mother, maybe a little over protective at times, maybe a little to obsessive about Christian's care at times. But if I have one flaw as a mom, it's that I care too much. But, when I read this comment, it definitely stayed with me for a few minutes. As I mulled it over in my head and tried to wrap my thoughts around it, I asked myself if I was really worthy of such a compliment. I contemplated on times when I felt less than a good mother, when I would lose my cool too easily because I was over exhausted and over -stressed. I remembered the time that Christian cried for an hour because he was hungry, and although I tried everything to calm him (except feed him) I remember the feeling when I realized that he was supposed to have eaten an hour ago and I had simply forgotten. There have been times when I wish I had reacted differently or done something differently, but in my heart, I know that I aspire to be the best mother that I can.

I guess it stuck with me because, like Tabetha, I had never thought about "not doing it." It was just what I did. It is hard, painful, and exhausting at times. If I could do something to make my son whole, I would do it in a heartbeat. If there was another way, I would probably choose it. But the fact of the matter is, it is not my choice.

When I tell people "It's not like I have a choice," they will answer "Yes, you do." I know they're referring to the choice I had to abort, or to put Christian up for adoption instead of raise him. But in all honesty, it was not my choice anymore than it was my choice to have a child born with a disability. God choose me, not to sound arrogant or haughty at all, I say it as humbly as I can. I remember being 15 and 16 years old, on my hands and knees at the alter of my church, and I would pray so earnestly that God use me in whatever way He chose. I told Him that I wanted His will for my life, not my own, and that my life was His to use, not mine. And I believe He did just that, because I asked Him too. So God chose me to be Christian's mother. Not because He knew that I could handle it or that I am so special, but because He knew that I would have the support I needed from family and friends, and because He knew that I would seek His help in raising Christian and getting through the hard times instead of trying to do it on my own. Again, I am not trying to lift myself up AT ALL. I am nothing without God. I am insignificant, unimportant, and worthless except for what God has placed inside of me, which is His spirit. All in all, I simply COULD NOT do this without His help and guidance. What do I know about raising a child with a disability? Not a thing. What do I know about God's plans? Nothing. But I stand firm on the scripture that we walk by faith and not by sight. I can't wait until the day that I can hear my son say those words and watch him live by those words. I know very little, but I know everything I need to know, because God guides my way and lights my path right where I need to take a step. Although there are times when I want to see the whole road, I am learning to have a sure footing in that one lit place.

Along the lines of being a "good mother," when Christian was a month or two old, a girl sent me a message through Facebook one day to inform me that I was a horrible mother because I did not abort Christian, but carried him to term and delivered him to live. She went on to explain how a friend of hers had a child diagnosed with the exact same thing as Christian and she loved her child so much that she aborted him so that he would not have to live such a horrid life. Without trying to diminish or belittle the pain that that woman was most certainly going through, I do have to say that she made an incredibly obvious wrong choice. I don't want to focus this part of my story on the woman who chose to abort her baby, because although she was wrong, I don't think it was a decision she made lightly or without thought. However, I would like to focus on the girl who cowardly approached me though Facebook to poke her nose in business that she was not involved in. This girl, sadly, had a small child, but apparently, did not grasp the concept of true love, which I see and feel in my son every day. She failed to see the gift beyond the packaging, the life beyond the loss, the joy beyond the tribulation, the peace beyond the chaos. Her vision was shallow. Her heart was weak. Her concept of love was defective. And because of that, she cannot understand what it means to not have choice in raising my son. The word "abortion" never crossed my mind when I was pregnant, but the word "love" sure did. Abortion was so far from a choice to me that it had literally never even hit me that I had the option until this girl brought it to my attention.

But to be honest, I didn't have a choice. Christian was alive the second God placed a soul into that tiny little embryo. He was my son before he was ever conceived. He was God's child LONG before the world began. So no, it's not my choice. It never was. So can I throw up my hands and just call it quits with Christian because the challenges are just too hard and I am too tired? I suppose I could, but will I? Absolutely not, and it's not because I am the "epitome" of a good mother. The answer has nothing to do with me at all. It is because God showed me to look beyond what I can see, to alter my idea of love to fit His idea of love, and to accept what He chose for my life because He is God and I am not. So, in what I do for Christian, how could I not? 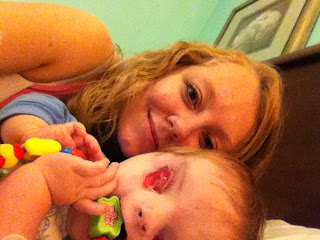 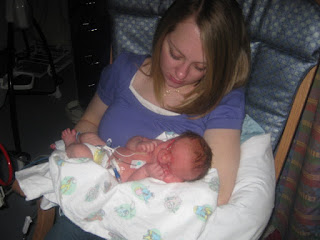