Is This Really What Our Society is Becoming? 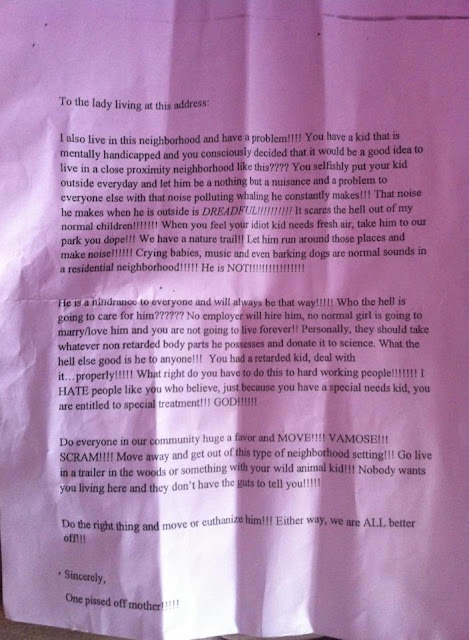 Is this really what our society is becoming? I had to ask myself the question when I came across this photo on my Facebook feed today. As I read, I could feel my face getting red. My heart just broke for the mother who had to open this piece of trash, and my temper flared at the thought of someone being so nasty and full of hate. This letter, so cowardly addressed with a made up signature instead of a real name, simply makes me sick. I can just see the letter's author, tiptoeing onto this mom's front porch, stashing the note, and running away like the coward she is, before anyone could see her.

I have a pretty good sized social media following, so I do want to address the coward who wrote that, on the off chance she sees this. But, I won't waste too much space, as she just isn't worth it. To her I say this: You need some serious emotional, and possibly mental, help if you can harbor so much hate that you feel the need or desire to attack a child with a diminished mental capacity or his family. Please seek help so that you can stop spreading the blatantly apparent emotional disease that's eating you alive from the inside.

But that's not really the reason I wanted to address this. Most of you who will read this will do so because you adore my sweet child who has a very physically evident disability. I seriously doubt that anyone who thinks the way the author of that letter does will take the time to open my blog and read it. But you guys are the ones I really wanted to share with.

When I asked myself the question "Is this really what our society is becoming" after reading this letter, I was disheartened. But immediately I began thinking of all the times that I have been attacked because of Christian's disability, and how quickly so many people came to my defense, and I remembered the force and the passion with which you have stood up for me and my family. I also thought about the 100,000+ followers Christian has, and how you celebrate every tiny achievement and every huge milestone that Christian accomplished, right along beside me, as if he was a member of your very own family. I thought of the gifts he has received and the friends we have gotten the privilege to met over the last few years. And in less time than it took to read that nasty letter, I answered my own question.

And the answer is a resounding "NO!" This is NOT what our society is becoming. This is NOT representative of the majority of our population. I believe most people would agree, that letter, that mindset, and that attitude possessed by that person are NOT okay. In fact, it's down right repulsive, sick, and straight from hell. And I think many of you would agree with me when I say that I question the mental capacity of anyone who would or could find it within themselves to author and deliver such a vile piece of garbage to another human being, let alone even think it.

I take pride in the fact that people come to me with questions about disabilities stuff. I love when people ask me questions. Some of my favorites have to be "How can I teach my children to accept people who have disabilities?" and "What is a non-offensive way to approach someone who is differently abled?" Okay, so I paraphrased there, but you get the idea. When people ask me questions like that, not only do I enjoy sharing my opinions and insights into the subject matter, but it gives me hope that there are people out there who genuinely care, who would rather wrap in love, the mama and child that were the subject of this letter, then to ever cause them any heartache.

My hope is that that letter is shared all over social media, partly because I hope that this, and a LOT of other messages of disgust, get back around to the author. But I also hope that as we share that image, we can all rally together in agreement that things like that are NOT okay, and that we can let our voices be heard in saying out loud "That is not acceptable." And hopefully one day, letters like that won't be written.

I've said this before and I will end with it because it bears repeating. In some societies, those with special needs are revered so much that people will bow down when they enter a room. It is believed that they are put on the earth not to learn like the rest of us, but to teach. Oh that WE could be such a society!!!!!!!!!!

Follow up: This letter is now making the news, and is causing outrage across the country, as it should! Read this story about the letter here: http://www.citynews.ca/2013/08/18/family-in-shock-after-hate-letter-targets-teen-with-autism/