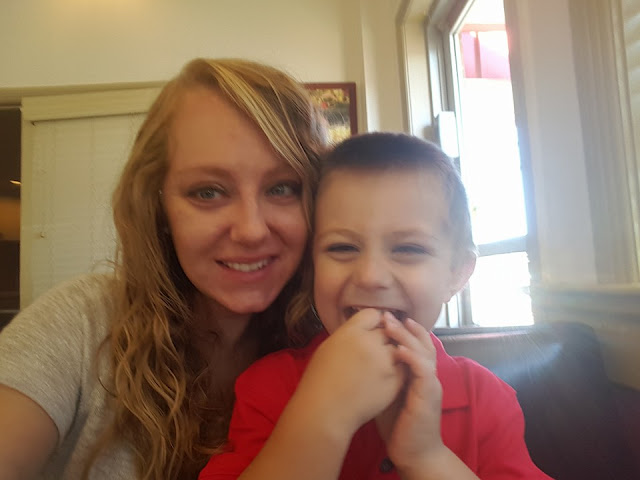 You have spent your entire life living in the shadow of Christian's disability. It's all you've ever known. You have slept on hospital couches, ridden literally thousands upon thousands of miles to make Christian's appointments, and spent most of your time as second string to Christian's internet popularity.

You have sacrificed so much to be so young. You have given up a "typical" childhood. You have given up days spent with "just the three of us" as nurses come in and out of our home all week to care for Christian. You don't act like the "baby" of the family, probably because you don't get to be the baby. You have had to grow up so fast. Your brother has needed you. I have needed you. To be more independent. To help out. To carry your share and,, it literally hurts me to write this, but part of Christian's share, too. Because Christian can't. 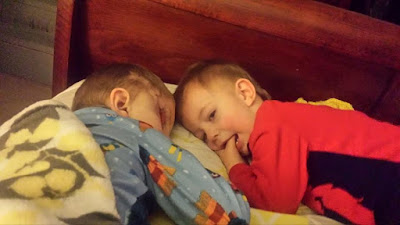 You have been measured and compared to your big brother for your entire life. Christian was never into things like you were as an infant. Christian would never think about getting into the stuff you have. We fought so hard for Christian's first steps that the day they happened was a celebration. The day you took your first steps in the front yard of our home one hot June morning, wearing that yellow shirt with the little crab on it, will forever be imprinted in my mind, but no one else seemed to make a fuss. So often people have approached us in public, doting over Christian, drawn to him or recognizing him, fussing over how wonderful he is, only to finally turn to you before they walk away, almost as an afterthought that it would be rude not to speak to you too, and ask what your name is again, because they forgot; or just call you "Christian's little brother."

You have spent so many hours in waiting rooms and parked cars while Christian was in therapy, hundreds at least, instead of playing. You didn't really fit in at therapies as a typical child. You weren't welcomed in the therapy rooms, but it wasn't fair for you to sit in a waiting room hours a week either. You were just sort of stuck. It broke my heart that my hands were tied and I had to choose between getting Christian's therapies or giving you necessary time to play. I knew which one I had to choose, but it wasn't because I chose Christian over you. I hope you know it was never Christian over you.

You learned patients at such a young age, waiting while I tend to Christian's needs first, even if you needed things, too. Sometimes his medical needs couldn't wait. Sometimes I had to choose to do a tube feeding or take my incontinent five year old to the bathroom again rather than just sitting in the floor and playing race cars with you. All you wanted sometimes was for me to sit and play race cars with you. But you waited.

You had to grow up quicker than most kids. You didn't get to just be a kid. You had responsibilities right away, from the moment you were able to carry them. You had to watch your brother endure painful procedures and lie, bloody, in hospital beds, too young to even understand why it was happening. You had to step up, do and learn things on your own, because I was overwhelmed with teaching Christian.


In all that you have endured in your young life, you have the right to complain and feel cheated. But you don't.

You wake up every morning with a "Mama! It's a hot, sunny day!" even when it's cold and rainy outside, because for you, the sun shines even on the dark days. You are the sunshine on the dark days.

You have reason to be unhappy, but you aren't. Your joy is so radiant that it infects others and you are desperate to share that joy everywhere you go. Joy for you is so simple. It looks like a Hotwheels Car, a cup of chocolate milk, or bowl of spaghetti. As surely as your eyes open in the mornings, your mouth begins to turn up in a smile. Joy is your default.

You have a deep understanding of what it means to be a family, to care about each other and work together for the good of everyone. You genuinely love people and always see the good in others. Your friendliness and acceptance of everyone you meet is admirable. You can't wait to show others your race cars, anxious to share your joy. You want nothing more than to share with others and love them.

You are wise  beyond your years, an old soul. I guess you've had to be. You've had to play the role of big brother, to guide Christian since he can't guide you. You've had to fill shoes that were never yours to fill, and yet you take it all in stride and do it anyways.

I'd be lying if I said I didn't sometimes feel guilty for all that you have had to go through at such a young age, for all you have sacrificed for your brother and for me. You deserve the world, and I want to give it to you, but sometimes you end up with so much less. It isn't fair. It's definitely not fair. You certainly didn't ask to be the younger brother of a little boy with so many extra needs.

But instead of letting it run you down or make you bitter, I am watching you turn into the most amazing young man. I feel honored that I get to see you developing into someone who is so kind and compassionate. You have let your short life experience refine you and shape you, and you are going to be the most amazing man one day. Chandler Tate Buchanan, you aren't living in a shadow. You are making your own sunshine out of darkness.