Christian is always hard to buy gifts for. He has been since he passed the easier infant stage where he liked empty water bottles and dog toys. Every year, I spend a lot of time researching products and trying to make sure it's something that he will enjoy for more than 10 minutes. He likes toys that give some sort of feedback and he doesn't like toys where the feedback has to come from him or he has to imagine it. So, action figures and dress up are out, but karaoke machines and microphones are in!

Chandler is so easy to buy for compared to Christian. Chandler makes a list starting in about August and by December it's longer than we will ever be able to cover. He never gets everything on his list, but it's typical eight year old boys stuff, legos, hotwheels, minecraft, roblox and the sort.

Meanwhile, Christian often struggles to even think of things he'd like to have. It's not that he doesn't want things, it's partly that the vibrant color or shininess of items doesn't attract him, so he really has to see the quality of a product, but also, he doesn't get to see as many things in a store or commercial, because unless he puts his hands on it, he really can't "see" it. And while Christian would LOVE if I let him touch every single thing in a store, I do not make a habit of doing that. :D

This year, I feel like we had quite a bit of success with what we found for him, though so I wanted to share some of our favorites with you all in case there are some parents out there like me struggling to find things for their quirky kiddo. So, here they are! And just so you guys know, each product I mention here has a clickable link which will direct you to that product. I'm an Amazon Associate so I do earn from qualifying purchases! So if you're thinking about purchasing any of these items, I appreciate you using my links! 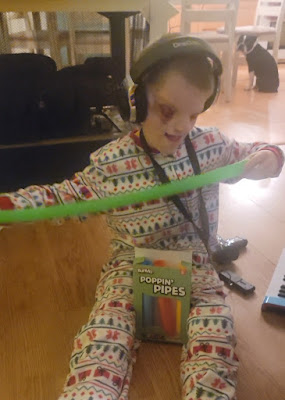 Christian first encountered pop tubes in therapy when he was little. I later got him one from an impulse buy bin at Kroger, but it is long gone. He hasn't seen one in a long time, and I came across them while browsing Amazon one day. I knew I had to grab them for him! They have been a big hit! He remembers them from years ago and has enjoyed playing with them again. They make noise when you pull them and put them back together, and they also give some touch feedback by "popping" as each rib of the toy opens up or closes. Also, if you open them and swing them around, they make a whirling/whistling type noise! A simple, yet fun toy! 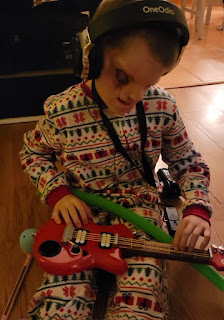 Christian loves all things music, so I knew when I saw this that he would love it! My favorite part about this guitar is that you can connect it to your phone by blue tooth and play songs through it, so kids can jam to songs they know as well as the songs already on the guitar. Christian has had a lot of fun with this one! Not only does he love music, but he also loves electronics, so this was a great toy for him! 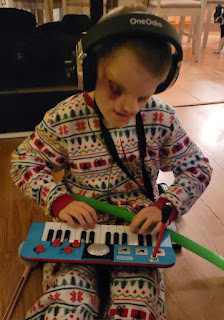 I couldn't get the guitar without also getting Christian the piano/keyboard that goes along with the set! This keyboard has a microphone and the ability to record the child's voice, so Christian has recorded himself over and over on this toy. It plays songs and also has the ability to connect by blue tooth so you can play songs, your child can sing and record themselves! Super fun! There are also drums and a DJ turntable in this set!
4. Otomatone 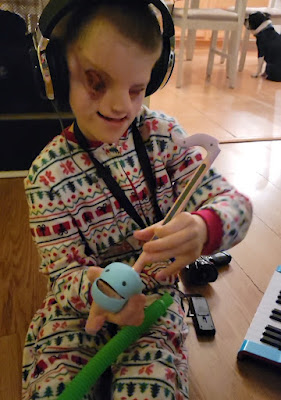 With Christian's love of music and sound, I thought this toy would be great. I saw it on a facebook ad back in the summer and remembered to look into it when Christmas came around. It makes cool noises while you slide your fingers in different places and combinations across the neck of the music note. It reminds me of a theremin just a bit, which Christian is fascinated by, so while we couldn't afford to get him a real theremin, this was a nice toy with a similar feel. It's actually a synthesizer, but Christian just enjoys all the cool sound variations it can make.
5. Discovery Kids Tornado Maker 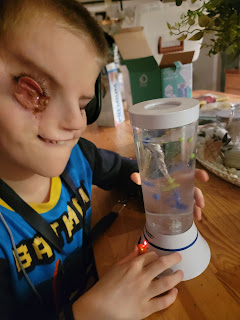 This one ended up being really cool. The boys are fascinated by weather and disasters, so we've talked about tornados a lot already. We live in an area that gets them often. But how do you tell someone what a tornado is who can't touch or see them? This was an awesome opportunity to show Christian what a tornado is. The set even comes with little "debris" that you can drop into the water and watch or hear it spin around. Christian was fascinated with it. This is not our first Discovery Kids toy and we really like the quality of the toys they make!
5. Yodeling Pickle
Last but not least, you read that right, a yodeling pickle! Now, hear me out. It realize it sounds weird, but it's hilarious and perfect for little boys who love goofy, funny things. How often do you see pickles that can yodel? Pretty much never! In our house, toilet humor and weird stuff is pretty much where it's at! So this one made Christian chuckle. Press the button on the plastic pickle (don't worry! it's wont' go moldy!) and it does just what it says. It yodels. It's simple, but for the price point, it's worth the giggles, and it's definitely a conversation starter! And just look at Christian's face! He loves this thing! :D 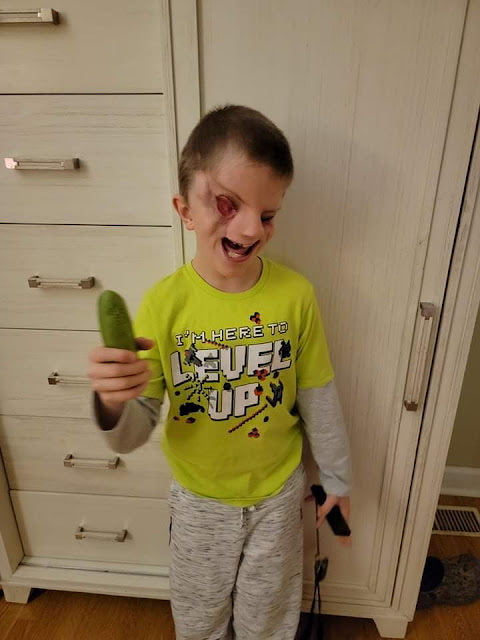