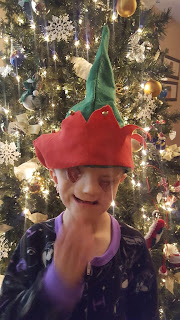 Yep! You read that title correctly. We have surgery number eight scheduled. I wanted to go ahead and let everyone know what is going on and ask y'all to begin praying for my C.

We are having a minor procedure, thankfully, on January 4th to place Christian's fourth set of ear tubes. This time, we will also be having Christian's adenoids removed.

This all sort of started when he fell and broke his nose. A blessing in disguise maybe? Christian was obviously concussed from his injury, along with the broken nose, as evidenced by the fact that he began vomiting once we reached the emergency room that evening. That warranted a CAT Scan to make sure there was no bleeding on his brain or anything else of concern. Thankfully, the scan showed no signs of serious injury except for the fractures on his nose. However, the fluid build up in his sinus cavity was so notable that the radiologist who read his scans made note of it. I wasn't aware that there was so  much build up. All I can go by is how much drainage there is, and I have honestly probably become a little too accustom to seeing some amount of drainage that either there was no evidence or I just missed how much sinus issue was actually going on with Christian. 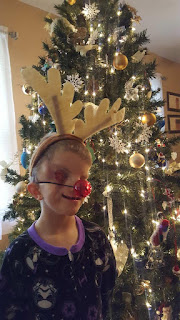 So, at the ER, the attending physician read the radiology report to us and noted "otitis media of the right ear." He sort of laughed, as if to brush it off, saying "I've never seen anyone diagnose an ear infection by cat scan." I bet he hadn't. Most of the time, it's so obvious that a cat scan isn't needed, I suppose. The scan also noted fluid in Christian's mastoids, which are pockets behind the ear that are not supposed to have fluid in them. That is not something that can be detected with a visual exam, and no doctor in their right mind is going to expose a child to radiation to check for an ear infection. Christians ears actually checked out clear by visual exam that evening. There was no sign of an ear infection to those of us looking at Christian. The only way any of us could realize there was an issue would have been that scan or Christian telling us. Bless his heart, I suppose that he is so used to living with just...snot... all the time, that he didn't think anything of it. He is certainly one to tell me if he isn't feeling well, and he hadn't said a word. This is just life for him, unfortunately. 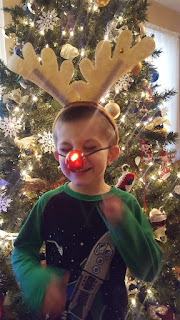 Christian has dealt with chronic ear infections, sinus infections, and rhinitis for most of his life. He has been on allergy medications since he was old enough to be on them, I do every homeopathic treatment I can do for him, and still, the sinuses never really go away. They are better at times, but in the winter, it's pretty much constant sinus drainage and a few infections thrown in that require antibiotics. Besides two allergy medications, Christian also gets local honey, a probiotic, vitamin C, D, and magnesium, and extra water in his tube daily. He gets an extremely healthy diet full of fruits and veggies, low in carbs and red meat. I also run a cool mist humidifier by his bed every night and use essential oils on him like they're going out of style. We have done allergy testing which provided no helpful information except that he isn't allergic to anything, and we have trialed ever allergy medication that he can try to see if any would be helpful. And yet, the sinuses persist.

Being on antibiotics often is just not a productive way to do things. Christian has had c diff before and we do NOT want to relive that. Christian just can't go back and forth to antibiotics every few months. It stops the issues temporarily but never truly gets to the root of the issue to solve it.

We've had three sets of tubes already, so I know from experience that ear tubes provide a lot of relief from ear infections for Christian. Allowing the fluid to just drain instead of build up means that Christian rarely ever gets an ear infection when he as tubes in. They pretty much become non existent, which means antibiotics become non existent in his system.

Right now, he has been without tubes for about a year, purposefully. There is always a balance to be had. Prolonged use of ear tubes ca cause damage to the ear drum. Christian's hearing is his link to the world, so it's vitally important that we protect it aggressively. So, we have to balance the damage that can be done by having ear tubes with the damage that can be done by having constant fluid build up behind his ear drums. His ENT and I agreed to remove Christian's tubes last year and see how he did. He'd had t tubes, which are a longer lasting tube than the typical one year expectancy, and done extremely well with them. He had went over a year without a an ear infections and his sinuses were fairly under control. So, we removed the tubes in hopes that his chronic ear infections would be done now that he was older, as is the case sometimes with kids. And he did great! Until he didn't. 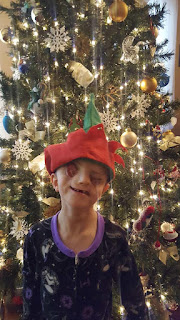 Christian's sinuses have flared back up recently, for reasons we can't figure out, and we are on ear infection number two in a matter of a little over a month. *sigh*

So here we are scheduling another ear tube placement. His ENT also recommended that we remove Christian's adenoids this time around as well. He said that in 80% of patients, it helps with sinuses and allergy type stuff. The reasoning is because bacteria can get trapped in the adenoids and just hang out there, causing reoccurring problems.

The ENT assures me that this is a fairly simple procedure and that Christian should be back up and bouncing quickly. However, I know that no procedure is ever routine when it's my child involved.

The ENT and I definitely discussed Christian's unusual anatomy. We think it's mostly to blame for his chronic sinus issues, and there is little to be done about that. But also, being the helicopter mom that I am (lol) I did discuss with the ENT the prospect that he would get inside Christian's mouth to remove his adenoids and find that his anatomy made it too challenging or risky. I made sure he knew that I would not be okay with him continuing ahead and taking any risks that were not feasible for the end result, which we hope is less sinuses. However nice dealing with less sinus issues would be, it's certainly not worth taking risks on harming Christian's internal anatomy or causing more surgery to be needed. That's honestly my biggest concern, and it's a concern of the ENT, as well. That, and the fact that Christian will have to have IV anesthesia.

There just aren't too many routine things that are routine when it comes to Christian. I am confident in our ENT's abilities and care for Christian (otherwise we wouldn't be seeing him), but I am always nervous about surgery. 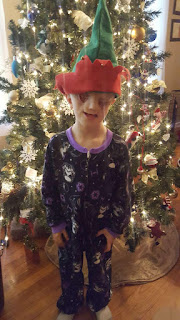 I am not planning on telling Christian until after Christmas. I decided that his probably reaction to learning that he has to have surgery will be to be stressed and anxious about it until it's over. So rather than having him stressed and anxious for the next month, I am going to let him enjoy Christmas and begin preparing him, maybe a week, or less, in advance.

So, between now and then, please be in prayer for Christian, his doctors, and this procedure. Please specifically pray that the adenoid removal procedure will be easy and smooth and without complication for Christian.