The day had finally arrived! Chris and I woke up at 3:30am, got everything together, and headed to Vanderbilt University Hospital. My c-section was scheduled for 8am. By the time all of the iv's were put in, all my meds were administered, and everything was set, it was almost 9 o'clock when I was taken back to the operating room. As the doctors were preparing everything and I was getting my spinal, a million thoughts rushed through my head. Finally, I heard a doctor say, "Here he comes!" and then "Happy Birthday!" At 9:32am, Christian Taylor Buchanan made his big debut. After just a few seconds, he began screaming. That was the best scream I had ever heard! I asked the anestesiologist at my head to peak over the curtain and tell me what color his hair was. He said, "blonde," but he was wrong. Ha ha! The doctor asked me if I wanted to see the baby, and I immediately said "Yes!!" They held him over the curtain just for a second to let me see him, then they took him over to the table to clean him up and check his APGARS. While the doctors finished up, I listened to him cry and waited to see him again. Before he was taken to the NICU, they held him down beside my head. He was crying, so I started talking to him, and he stopped and listened to me. The nurse started to take him and he started crying again, so she brought him back down to me. Again, I talked to him saying, "Hi baby! I love you!" and anything I could think of 2 minutes after giving birth. He stopped crying again and listened. Finally they took him to the NICU and I was taken to recovery.  It was 4 o'clock that evening before I was able to get up out of the bed and make the 1/3 mile trek to the NICU. Our baby boy was finally here!!! But things were not as we expected. We knew about the cleft palate and lip, we knew about the club foot. What we didn't know before Christian was born was that he would be born almost completely blind. The best day of our lives had turned into the worst. 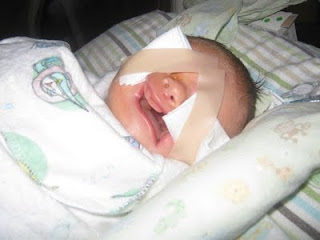