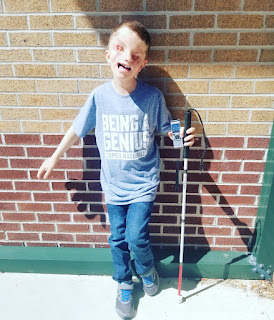 Speaking of social media, I wanted to remind you guys that we are not only on Facebook, but also Instagram, Youtube, and Patreon! Search my name on any of those platforms and you will find me!

I wanted to let you all know today that Christian will be undergoing a small procedure this coming Friday. He is getting his 6th or 7th set of eartubes. His last two sets of the long lasting T tubes have only lasted him about a year. He seems to consistently get a bad ear infection, his ear will bleed from being so infected, and then the tube falls out. This seems to be a pattern for him!

You may remember that back in December, the day after Christmas actually, I brought Christian to the ER at the advice of the doctor at the local children's hospital. His ear had started bleeding and so I figured we had yet another ear infection. For whatever reason, Christian's doctors always have a hard time seeing his ear drum, so they couldn't tell if it was coming from the eardrum, if the ear drum was infected, or what was going on.

I mentioned to the doctor that Christian had fallen and hit his head earlier that day and had acted sort of concussed for the remainder of the day. That's when he decided that we should probably go to the ER for a CT scan to rule out a brain bleed. Thankfully, it was just an ear infection, but we had no way to know which it was without the diagnotic imaging we could only get at the ER at 7pm on the day after Christmas. And in the middle of when COVID numbers were at an all time high! What an adventure! 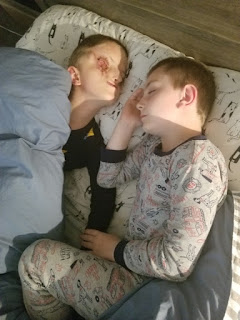 Alls well that ends well, I suppose, but it was not fun sitting in an ER on the day after Christmas during a pandemic. Yall, they were so full and overwhelmed that we sat on a bed in the hallway. We totally didn't mind. I felt a lot of sympahty for the healthcare workers working during all this.

Anyways, after all that, we knew it was an ear infection, and we knew that meant he'd had 2 ear infections in about a 2 month period, which meant we needed to see his ENT again. We had just followed up in November and were doing a trial with no ear tubes to see how Christian did. The doctor told me that at Christian's age, kids with clefts start to not need eartubes, so we could give it try. Unfortunately, it was a no go for Christian. His ears just aren't quite ready. It's very common for kids with clefts to need ear tubes, and it's reasonable that Christian needs ear tubes for years after other kids with clefts may not, considering the severity of his cleft.

So, tomorrow we go for his required COVID test. This will be, I think, the 4th time he's been tested for COVID, and each one of those has been a precautionary pre-op test. Thankfully, his children's hospital does not do the very invasive one, so they aren't awful for him.

Tomorrow I will have to break the news to him that he is having a procedure on Friday, since we will be going for his COVID test. He's not going to be happy about it, and I've held off as long as I could so as not to stress him out. He's going to be pretty stressed tomorrow when I tell him, and he probably won't sleep a lot up until surgery.

I would love to go live one day this week to let him talk about it. We will try do that tomorrow evening. We've got a pretty busy week this week beyond just his procedure. My uncle is having a major surgery on Wednesday and I will be going to the hospital after work to help my aunt get home safely. I also have had to start going back into the office 2 days a week, which means 3 to 4 hours of commuting per day on those days. I generally leave home at 5am and get home between 4 and 5am, so as you can imagine, not only am I totally wiped out, I have little time for much else those days, unfortunately. This week will be my second week back in office in the last year, so it's been tiring readjusting to that.

So, let's shoot for 7pm CST tomorrow evening, Tuesday the 29th. I'll let Christian tell you guys all about surgery and if you have questions for him, I know he would love to answer them. He loves you guys and adores when I post his pictures for you guys. He often asks me to post pictures of him on facebook and loves when I read the comments to him! 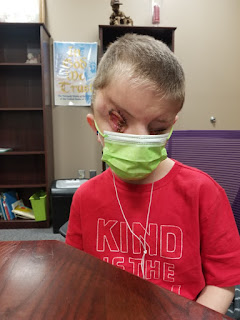 Thanks SO much guys and I can't wait to chat tomorrow live!

August 19, 2013
It strikes me as odd that I have been asked many, many times if I will have Christian undergo cosmetic surgery to repair his birth defect. Apparently, it's not an odd question to most people, because I could not tell you how many times I've been asked. The number literally lurks somewhere close to 500, if I had to guess. I am not AT ALL offended by the question, and I enjoy explaining my answer, but still, I find it odd to be asked. Imagine your beautiful child that you simply adore. Her little button nose, those ears he got from his daddy, that little smile with that one not-so-straight tooth right up front, those freckles that dot her cheeks, that bright red hair, or that jet black hair. As you imagine that, I am sure you have a few emotions that go along with it: adoration, admiration, love. You probably think that your child is the prettiest thing you've laid eyes on. Well, when I look at my child, with tissue in the place of where eyes should be, and a crooked s
123 comments
Read more