Thank you so much for joining me today on my blog! I've got something today that I want to talk about that has just fired me up, you guys. And so let's just jump right into it. I'm going to share a screen capture here for you guys.  I received a comment a few days ago on a video I posted. The video is of me holding Christian while Christian smiles. During the video, I give him a kiss on the cheek while a song plays in the background. The video text says "When people tell me that Christian shouldn't have been born" and then the lyrics to the song says "Let me show you what you're missing. Paradise."

So somebody actually had the... I don't even know what the word is... I would say low intelligence, but I don't even think it comes from that, and I don't want to insult people with intellectual disabilities because they know how to be decent humans. But the had the audacity or gall or whatever to comment on that video and say, "he suffering just like a dog aging he can't even see or enjoy life just like how we put animals down for getting old or for certain conditions he should be put down no events, but he's living in misery."

I just want to note first off that there is not a single bit of punctuation in this entire comment. I typed it out as it was typed, without correcting it so that it would be accurate. Like, this person is telling me what to do with my child but doesn't know how to use a period. So I'm just going to start there. The audacity of that alone is staggering.But let's break this down a little bit further. So let's let's take this first phrase in the drivel of a comment, "he suffering just like a dog ageing[.]" Not even "he's." There's no apostrophe to be found and not even an "s" on the end of "he" to make the conjunction yet this person somehow thinks they have the authority to instruct me on my child? Besides that, this is a stranger on the internet who knows no more of us than the 10 second clip he commented on. Secondly, this is a video of Christian smiling and being held and kissed my his mama. Okay, stranger on the internet. What evidence do you have to support your proposition that he's suffering? I'll wait, and I'll be waiting until eternity because there is none. He isn't suffering. But the fact that this person would make that statement as if it's a sure fact is what makes me the most angry. 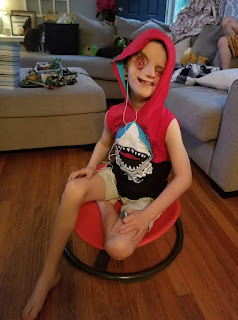 Secondly, why is this person comparing a human being to a dog? That part of the comment tells you everything you need to know about what type of person this guy is. This entire comment is rooted in dehumanization and ableism as evidenced by the fact that he compared my son to a dog.
The next sentence in the comment says, "he can't even see or enjoy life[.]" Imagine my shock at reading this. All this time I thought Christian laughing and smiling and exuding joy was genuine. So it comes as a surprise to me that being able to see is how we measure if somebody enjoys life or not. I had no idea that only blind people have depression or anxiety, or that only blind people didn't enjoy life, and that if you have sight, then you automatically enjoy life and no one with their sight is ever not enjoying life. (Insert heaviest sarcasm ever.) That's wild to me because I struggled with depression for about eight years. How did that happen since I have sight because according to this person, only disabled people aren't happy?
See, I thought we measured quality of life on things like if somebody has adequate nutrition, if somebody has responsive, attached parents who love them, if somebody has access to clean drinking water and health care and education. You know, those types of things. I did not realize that we based quality of life solely on whether or not somebody is blind. That's a new one on me. Shocking right?
So obviously that entire paragraph is filled with sarcasm because where did this person come up with this craziness? Why do people make things up and then come on Facebook and just spew them? He didn't even try to be correct. He just wanted to be loud. All you have to do is think about a single person you know who has a vision who's not happy. All of us are not happy at some point. All of us struggle with misery at some point. That's called being human. Misery is part of the human condition, not part of the disabled condition. This person is so wrong that it just baffles me.
So let's move on to the 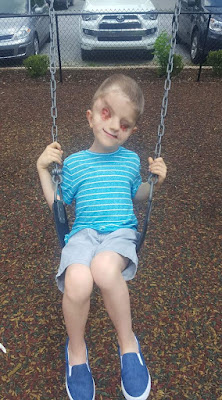 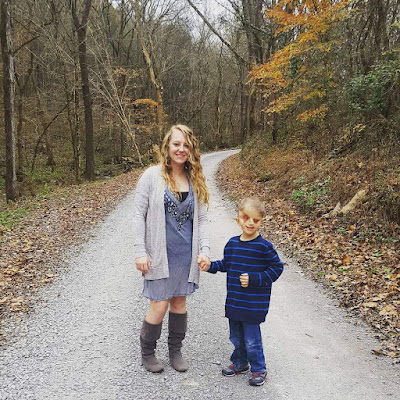 August 19, 2013
It strikes me as odd that I have been asked many, many times if I will have Christian undergo cosmetic surgery to repair his birth defect. Apparently, it's not an odd question to most people, because I could not tell you how many times I've been asked. The number literally lurks somewhere close to 500, if I had to guess. I am not AT ALL offended by the question, and I enjoy explaining my answer, but still, I find it odd to be asked. Imagine your beautiful child that you simply adore. Her little button nose, those ears he got from his daddy, that little smile with that one not-so-straight tooth right up front, those freckles that dot her cheeks, that bright red hair, or that jet black hair. As you imagine that, I am sure you have a few emotions that go along with it: adoration, admiration, love. You probably think that your child is the prettiest thing you've laid eyes on. Well, when I look at my child, with tissue in the place of where eyes should be, and a crooked s
123 comments
Read more